Why JBS's Business Model is so successful? 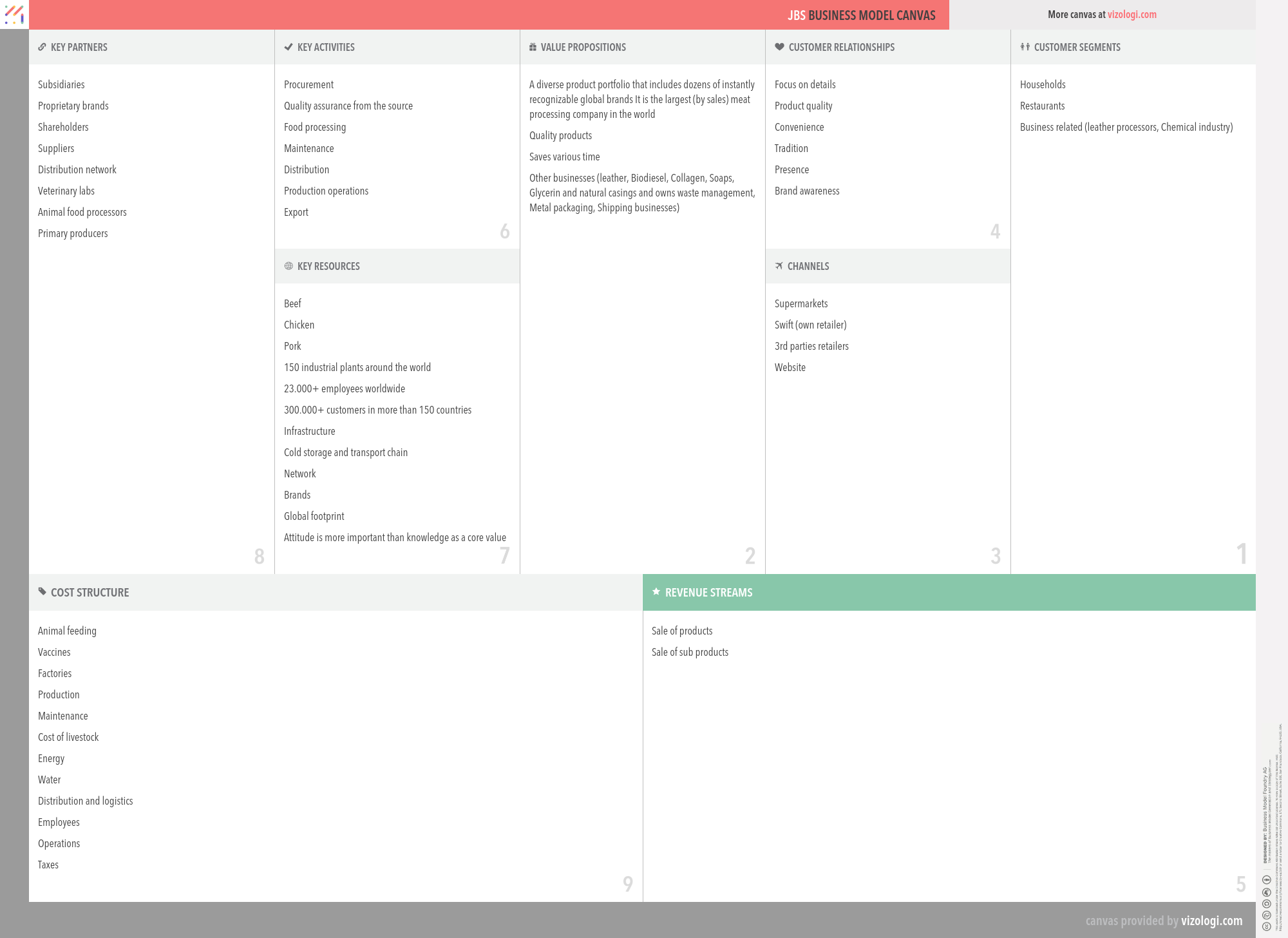 Jbs SA, formerly Friboi Ltda, is a Brazil-based company primarily engaged in the meat processing sector. The company's activities are divided into three business Segments: Beef, which operates slaughter, cold storage and meat processing facilities for the production of beef preservatives, fat, feed and derivate products; Chicken, which includes refrigerated poultry meat and meat cuts supplied to restaurant chains, food processors, distributors and supermarkets, among others, and Pork, which includes slaughters, processing, cold storage of pork meat products and by-products. Its products are distributed under various brand names, such as Friboi, Swift, and Bertin. In addition, the company is involved in the leather tanning, aluminum cans production, industrial waste management, soap, glycerin and biodiesel production, as well as transportation, among others. The company operates in the United States, Canada, Mexico, Argentina, and Paraguay, among others.

Disrupts by 'brand bombing' competitors, often by offering below cost. Hypermarkets, like other large-scale retailers, generally operate on a high-volume, low-margin basis. They typically span a space of 5,000 to 15,000 square meters (54,000 to 161,000 square feet) and stock more than 200,000 different brands of goods.

A store-within-a-store, sometimes known as a shop-in-shop, is an arrangement in which a retailer leases out a portion of its retail space to another business to operate another independent store. This arrangement is prevalent with gas stations and supermarkets. In addition, numerous bookstores collaborate with coffee shops since consumers often want a spot to relax and enjoy a beverage while browsing. Frequently, the shop-within-a-store is owned by a manufacturer who operates an outlet inside a retailer's store.

Utilizes a multi-tiered e-commerce approach. The firm first focused on business-to-consumer connections with its customers and business-to-business ties with its suppliers. Still, it later expanded to include customer-to-business transactions after recognizing the importance of customer evaluations in product descriptions. It now also enables customer-to-customer transactions by establishing a marketplace that serves as a middleman for such transactions. The company's platform enables nearly anybody to sell almost anything.

Tyson Foods, Inc., incorporated on January 31, 1986, is a food company, which is engaged in offering chicken, ...
View Canvas
foodmeatlivestockporkbeefpoultryhambaconprocessing

WH Group is the largest pork company in the world, with number one positions in China, the U.S. and key market...
View Canvas
foodmeatporkfood processingpacked foodsflavoring productspigsbutchernutrition

Sysco Corporation (Sysco), incorporated on may 8, 1969, is a distributor of food and related products primaril...
View Canvas
foodcateringdistributionfoodserviceequipmentsuppliesmealsrestaurantshospitals