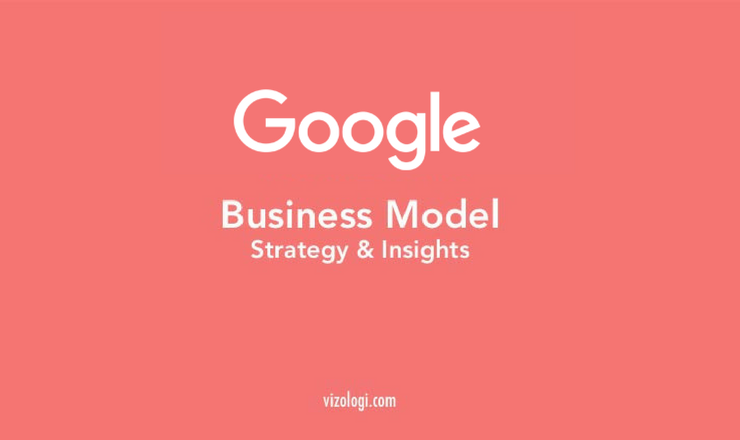 There are different popular search engines in the world like Yahoo, Google, Bing, Ask.com, Chacha.com etc. Out of these, the most loved search engine is Google, if you ask anyone. This is evident from the 89.5 billion US Dollars generated as revenue in 2016. Google, started as a research project, was founded by Larry Page and Sergey Brin in 1998 while they were PhD students at Stanford University, in California. Just like any major famous start-up, Google was founded in the garage of Susan Wojcicki, a mutual friend of both.

The founders first named the search engine “BackRub”, because it was used to check backlinks to estimate the importance of a site. The name was then changed to Google, which actually came due to misspelling the word, googol which is the number 1 followed by 100 zeros. Googol was decided because the search engine was meant to offer large quantities of information. August 2015 saw a major decision by Google. It was decided that all the interests of the company would be reorganized as a conglomerate called Alphabet Inc. with Google continuing to be the umbrella company for its Internet interests. Once this happened, Larry Page, who became CEO of Alphabet was replaced by Sundar Pichai as the CEO of Google.

A subsidiary of Amazon, Alexa Internet, Inc. listed Google.com as the most visited website in the world. This was not the only feather in the cap. Youtube and Blogger along with other Google services were also listed in the top 100 most visited websites.

Products and Services launched by Google

Previously known as Google Print and Google Book Search and also by its codename Project Ocean, Google Books store books and magazines scanned and converted to text using optical character recognition (OCR). Every book and magazine is procured directly from publishers and authors and also through the Google Books Partner Program or from Google’s library partners. By October 2015, over 25 million books were scanned by Google Books.

Google Groups, operational since February 2001, offers discussion groups for people having common interests. It also provides a gateway to Usenet newsgroups via a shared user interface. It allows users to start or access any threaded discussions via email or web interface. Other than accessing Google and Usenet groups, users can also set up mailing list archives for e-mail lists that are hosted elsewhere.

This program allows publishers in the Google Network of content sites to publish automatic image, text, interactive media or video advertisements. These are audience-oriented advertisements. The overall authority over the ads is Google itself. Revenue is generated depending on if the ad is a per-click or per-impression basis. Operating on HTTP cookies, over 14.3 million websites use AdSense.

Google’s favourite online advertising service is AdWords. Here advertisers pay to display product listings, brief advertising copy, and video content within the Google ad network to web users. It works partially based on cookies and partially on keywords determined by advertisers. Based on the search history, Google decides which ad to put for whom. When the ads are clicked, the relevant partner websites receive a portion of the generated income.

The file storage and synchronization service developed by Google and launched on April 24, 2012, is Google Drive. It lets users store files in the cloud, synchronize and share files across devices. It offers online as well as offline capabilities. It offers 15GB worth free storage space while other higher sizes are offered through special paid plans. The privacy can be changed from private to public to restricted viewing.

The email service launched by Google is Gmail. Beginning with just 1GB storage space (which itself was higher at that time when compared to other services like Yahoo.com and Hotmail.com), it rose to 15 GB storage space now. Files up to 25Mb in size can be attached to the email while higher sizes are attached using Google Drive. Gmail is available on the web as well as on Android, iOS and Windows devices.

One of the most popular music and podcast streaming service and online music locker, publicly launched on November 16, is Google Play Music. The free service is limited to up to 50000 songs after which it is paid. Users can also buy music with this service. It also offers offline services. It’s available in Android, iOS and Windows devices.

Written in Java and Javascript, Google+ is an internet-based social network that is operated by Google. Though its user usage rate was high in the beginning, people prefer other social networking sites than Google+.

Other than the products and services launched by Google, it has also been acquiring numerous companies from all around the world. Here are some of the few major revenue generating acquisitions.

reCAPTCHA was designed by Luis von Ahn, Manuel Blum, Colin McMillen, Ben Maurer and  David Abraham at Carnegie Mellon University’s main Pittsburgh campus. Created to establish if the user is a human or not, it took the internet by storm by aiding in the digitalization of books.  Google acquired reCAPTCHA in September 2009 and have been using it as an important feature of its Google Books project where rare, ancient and out-of-print books are digitalized and offered to the public. With the use of reCAPTCHA, humans have digitalized over 13 million archived articles of The New York Times from the past 20 years or so in just a few months. Through mass collaboration, books that are impossible to be scanned by computers are digitalized as well as translated into different languages. The CAPTCHA words are distorted further by reCAPTCHA in order to suppress the chances of another cyber-attack program solving the CAPTCHAs.

Google Earth, developed by Keyhole, Inc., is a computer program that provides a 3D representation of Earth based on satellite imagery. This computer program maps the Earth by superimposing images acquired from aerial photography, satellite imagery, and GIS data allowing users to see cities and landscapes from various angles. It can be accessed on the desktop as well as mobile devices.

Before getting into the detailed structure of the business model of Google and analyzing the important segments, let us look into the main sources through which Google, Inc. earns revenue.

How does Google, Inc. earn revenue?

The majority of the revenue is generated from advertising. AdWords and AdSense are two sources of advertising revenue. AdWords are audience specific and generate 70% of the company revenue while AdSense allows advertisers to join its network and display ads on its website.

Google Play Store for mobile devices and Web store for the desktop are ways of generating revenue from apps. Out of more than 2 million apps, there are paid ones as well as free ones with in-app purchasing. Depending on the OS of the mobile, Google receives revenue in the form of commissions. Other than that app developer has to pay for their apps to be displayed in the store. Books, Music, Movies etc are also sold from Google Play Store.

Google also gains revenue from selling smartphones and other pieces of hardware tech like the Chromebook, Google driverless car, Nexus phones etc. The revenue gained is less when compared to the above two. 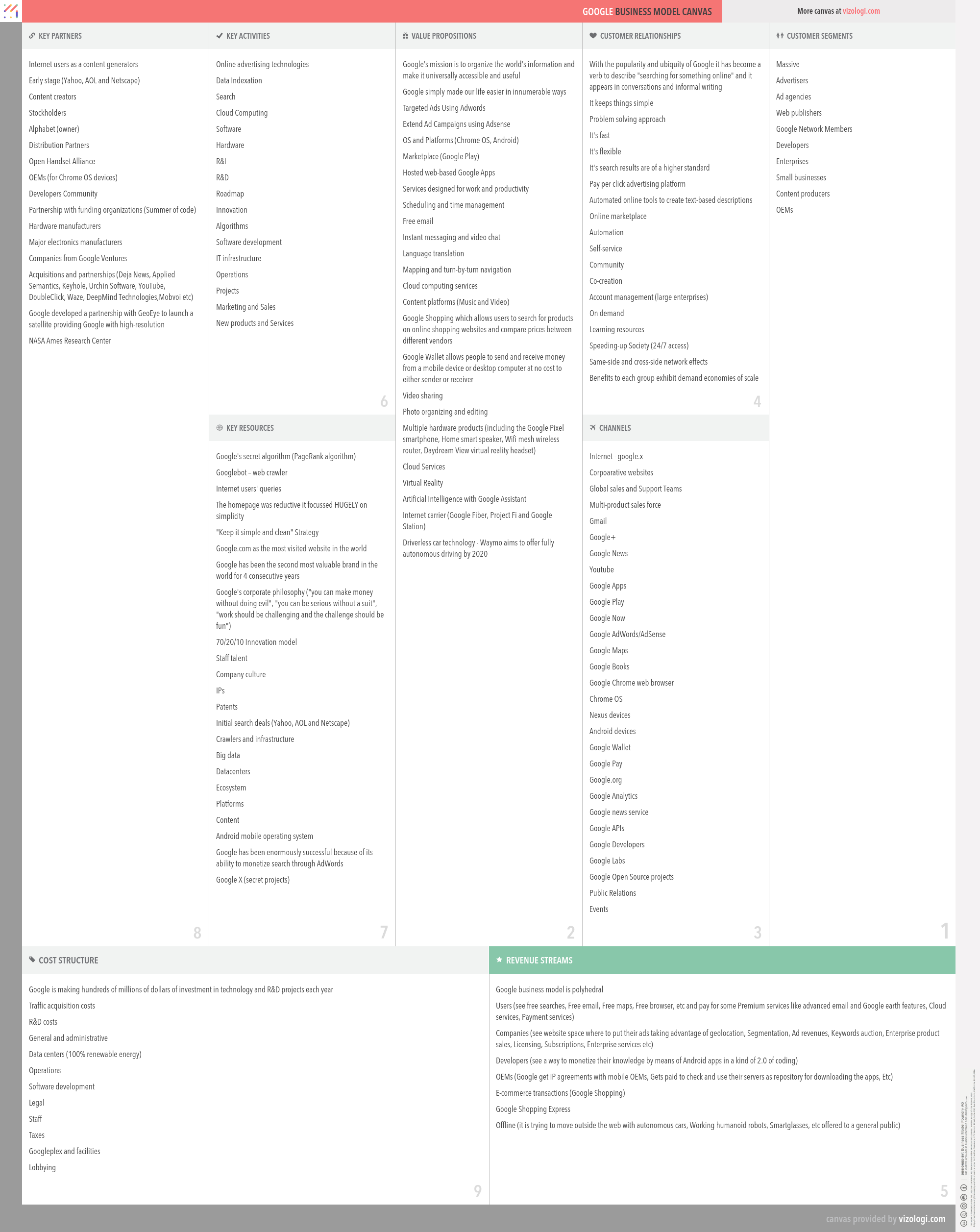 Customer Segments: This denotes the people for whom Google is useful.

Value Propositions: What all problems can Google solve and what all do they have to offer.

Channels: What all are the platforms used by Google to reach the customers/users.

Customer Relationships: Features offered by Google to connect with the customers and how they connect back.

Revenue Stream: What are the main income sources? Where do all the users have to pay?

Key Activities: What are the activities undertaken by Google.

Key Resources: What all resources do Google need to be successful?

Key Partners: Who all help Google? What all do they do?

Cost Structures: What are the types and relative proportions of fixed and variable costs that Google incurs?

The future growth of Google

It is predicted that Google will always remain as the most popular website in the world, right now it defines itself aa a AI as a Servcice, the future of Google goes to be a complete Artificial Intelligence assistant. The revenue generation is always on the rise and will continue like that. Google CEO Sundar Pichai has proclaimed that Artificial Intelligence is the future of Google. Virtual Reality is another project by Google. Another major gold mine of Google is Google Fiber or Waymo, its autonomous vehicle technology division. This self-driving car is estimated to have a market worth of $42 billion by 2025.