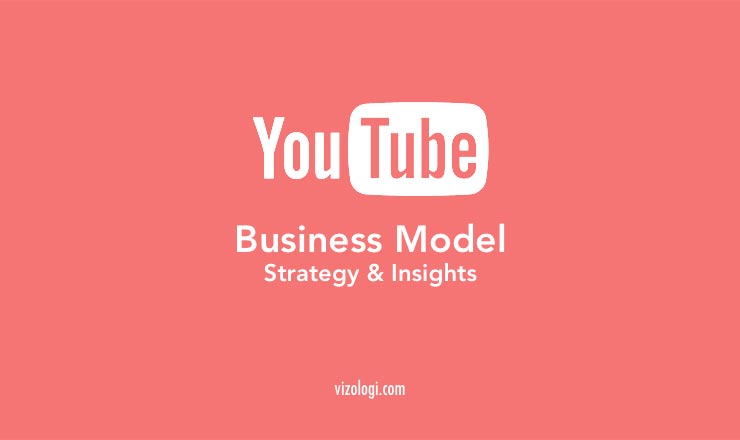 What has become, what most might call, the Television of the new generation? What is it that has become the go-to for any video to be looked up? Which is the most popular video streaming website in the world? By now you would have guessed the one. Of course, without a doubt it is Youtube. Chad Hurley, Jawed Karim and Steve Chen are the founders of this behemoth platform today that started off as a dating website. They used to be working at Paypal.

Initially, it was headquartered San Mateo, California. The site went live on 14th February, 2005. Unlike what the website is today, Youtube actually began its journey in the form of a dating website. Chen, at a conference, once stated that the founders always wanted to do something with video but they were not clear on how they would practically implement it. And they decided to go for dating. The slogan for this new website of theirs was: Tune in, Hook up! You could upload a video about yourself so that others could view it. However, this turned out to be a failure. They paid 100$ a month to host the videos while they had almost no users. After the first days of launching the website, when there was no uploaded video, they scraped the dating website idea and opened it to a general platform. They left it to the users to make Youtube what it was meant to be. Meet me at the Zoo was the uploaded on April 23rd, 2005 and was the first video to be uploaded by one of the co-founders himself, Karim. By June the website was completely different and showed signs of success. From then on Youtube went on to become the giant it is today.

Youtube, today, is basically a website on which people can watch and upload videos. But that is an understatement. Youtube offers its users much more than just that. Youtube has many features embedded in its video streaming. The website has a search bar through which you can access relevant videos among the billions that are available. This makes it so much easier for users to search exactly what they are looking for. You can optimize your search by using keywords. Youtube allows its user to host a channel, on which they can upload any videos they like. They can even create playlists to categorize their videos based on the content. Youtube lets their users upload 15 minute long videos. But for those who abide by the site’s guidelines, they can upload up to 12 hour long videos. Users can enter captions for their videos which allows them to become more relevant to searches. Apart from this, users can even stream live. However there is a limit to this. Users with a minimum of 100 subscribers only can go live. The live stream can be at 4K resolution upto 60 fps and also be a 360 video. You can even upload 3D videos on Youtube which you can see with the Anaglyph 3D method and other ways as well. 360 videos are also available on Youtube with the help of Google Cardboard. Youtube also has a community feature that allows a channel to host a community tab. On this, it can post videos, images and GIFs for viewers. YouTube has not restricted itself to the official website. YouTube videos can be viewed on other pages other than website. There is a HTML code in every YouTube video which enables it to embedded in other websites. This feature in more often used by social media sites.

YouTube Red is a premium feature that YouTube has. It is like a subscription service that gives the user access to many otherwise not accessible facilities. These include, streaming videos without any advertisements, content that is normally not accessible,and the playback feature on mobile devices that is offline and background. You also get access to all the services of Google play music.

In 2017, on February 28, YouTube announced the launch of another service called YouTube TV. It is a live TV service which has over 40 channels. However this service is available only in selected U.S. cities. It comes with a charge of $35 per month. It offers unlimited Cloud DVR storage. It can record your favorite shows simultaneously. It is available on your phone, TV and computer.

YouTube really has a very interesting business model to begin with. From it’s very inception the company has been evolving and spreading so rapidly that it makes one curious behind the design of this success. But first, let us understand how does this company get its revenue.

YouTube, as we have seen in the earlier paragraphs, is a video sharing website. Its product are its users. That’s right. What YouTube essentially is selling are its users to various advertisers. They do have other sources of revenue as well.

Most of the videos on YouTube are uncharged for and completely free for users to view, and it’s because of this reason that they get such a huge number of visitors everyday: over thirty million. The simple fact that they get so many people visiting their website on a daily basis, attracts a large crowd of advertisers to them. One method is through sponsored videos. The advertiser pays YouTube according to the number of views it receives after the ad has been selected. The sponsored video is displayed first on top of all the videos and its find is based on specific keywords that will be searched. The second method through which it makes money through advertising is by embedded videos. The advertisement that is played at the beginning of a video is the embedded videos. Here as well, YouTube gets its pay based on the viewing. The third method is the ads displayed on the homepage of the website. Upon opening the homepage of the website, there are certain blocks of ads that are shown along the sides. These too are advertising schemes that YouTube offers its customers. Here, the advertisement earns revenue through a mix of clicks and views.

YouTube also earns revenue through their premium services they offer, such as YouTube Red and YouTube TV. This is because of the constant battle between ad pushers and ad blockers, and so they have to rely on such services by charging a monthly fee. Youtube has also launched a program that will have paid channels on YouTube and will charge subscribers a monthly fee to gain access. 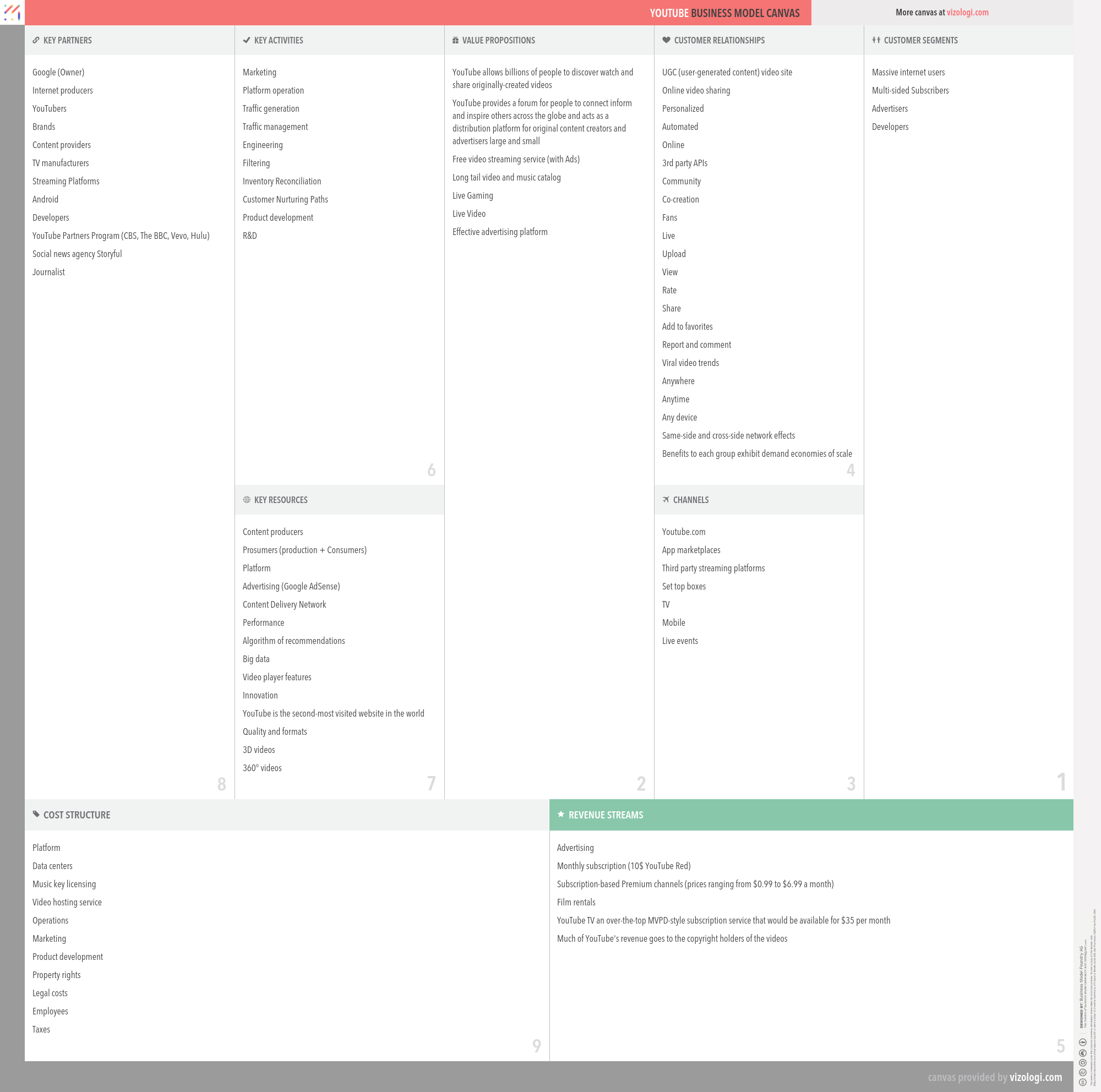 Customer Segments: The people who use YouTube and derive value out of it.

Value Propositions: What is it that YouTube offers to its users.

Channels: What does Youtube use to reach out to its customers.

Customer Relationships: What does YouTube do to maintain relationships with its customers.

Key Activities: What are the activities carried out by Youtube.

Key Resources: What are the essentials to YouTube’s success.

Cost Structures: What are the types and relative proportions of fixed and variable costs that Youtube incurs?

Considering all the sources of revenue and the costs that the company incurs to host the videos, YouTube is still struggling to make significant profits. The users are making money from third parties by promoting products. Youtube needs to start dabbling in this area in order to make up for their shortcomings in their profits. YouTube’s CEO still says that YouTube is at the investment stage in its growth. Youtube is trying to figure out a complete model that will allow them to have sizeable profit gains. But YouTube is the second most  visited site in the world. This gives them an edge to begin with. They can capitalise on this fact massively and become one of the  top most profitable businesses ever to exist. Just like the original pivot from a dating website to a common one, YouTube needs another simple pivot to make it a money making machine. That is YouTube for you.