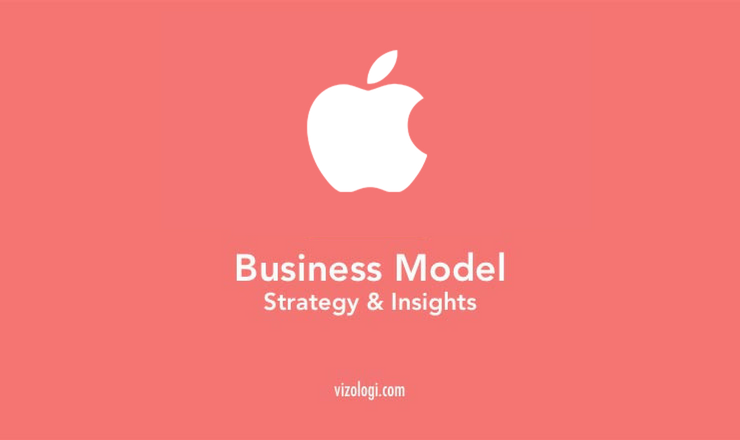 Apple has always been a major favorite of customers from all around the world. The sleek designs of their products and their uniqueness have always attracted people. This attraction is seen by the $229 billion generated by Apple in the 2017 fiscal year. Apple was founded on April 1, 1976 by tech-entrepreneurs Steve Jobs, Steve Wozniak and Ronald Wayne. The first product of the company was the Apple I personal computer which was single-handedly designed and hand-built by Wozniak.

By going public in 1980, Apple started its journey towards success. Thought initially the high prices of the products as well as the internal power struggles caused issues for the company, they were resolved later on. By revenue, Apple is the world’s largest information technology company and the world’s third-largest mobile phone manufacturer after Samsung and Huawei. Apple has always been ranked as the world’s most valuable brand repeatedly.

Each and every product launched by Apple has been well received by the customers. There have been good as well as challenging reviews for all the products. Here are some of the most popular products launched by Apple.

Launched on 24 January 1984, Mac or Macintosh is a group of personal computers designed by Apple Inc. They used to sell Macintosh along with Apple II group of computers for almost ten years before Apple II was taken from production in 1993.  While the varieties of Macintosh are different now, the original Macintosh was in fact the company’s first mass-market personal computer which had a graphical user interface, built-in screen and mouse.

There are a series of operating systems developed on the line of Macintosh by Apple. As of 2016, the operating system was called macOS. The current version is macOS High Sierra. Non-Apple operating systems like Linux, Microsoft Windows and can function in Intel-based Macs with the aid of Boot Camp or third-party software. The present varieties of Mac which can be seen in the stores now are iMac, Mac Mini, MacBook, MacBook Pro, Mac Pro and MacBook Air.

Smart phones running on iOS, iPhones are the most favorite product of Apple Inc. Released on June 29, 2007, there have been eleven generations of iPhones till date with each phone accompanied by one of the eleven major releases of the iOS operating system.

Including a virtual keyboard and a multi-touch screen, the user interface is complete in iPhone. iPhones can be used to take pictures, videos, send messages, browse the web, navigate with GPS etc. The latest variant of Apple in the market is iPhone X. iPhones are credited with making Apple one of the world’s most valuable brands.

One of the most popular portable media players as well as multi-purpose pocket computers designed by Apple Inc is iPod. Released on October 23, 2001, iPods also serve as external data storage devices. Though iPod was one of the best selling cakes of Apple, by the middle of 2010, iPhone overtook iPod on the number of sales made. The only version of iPod on sale is iPod Touch. 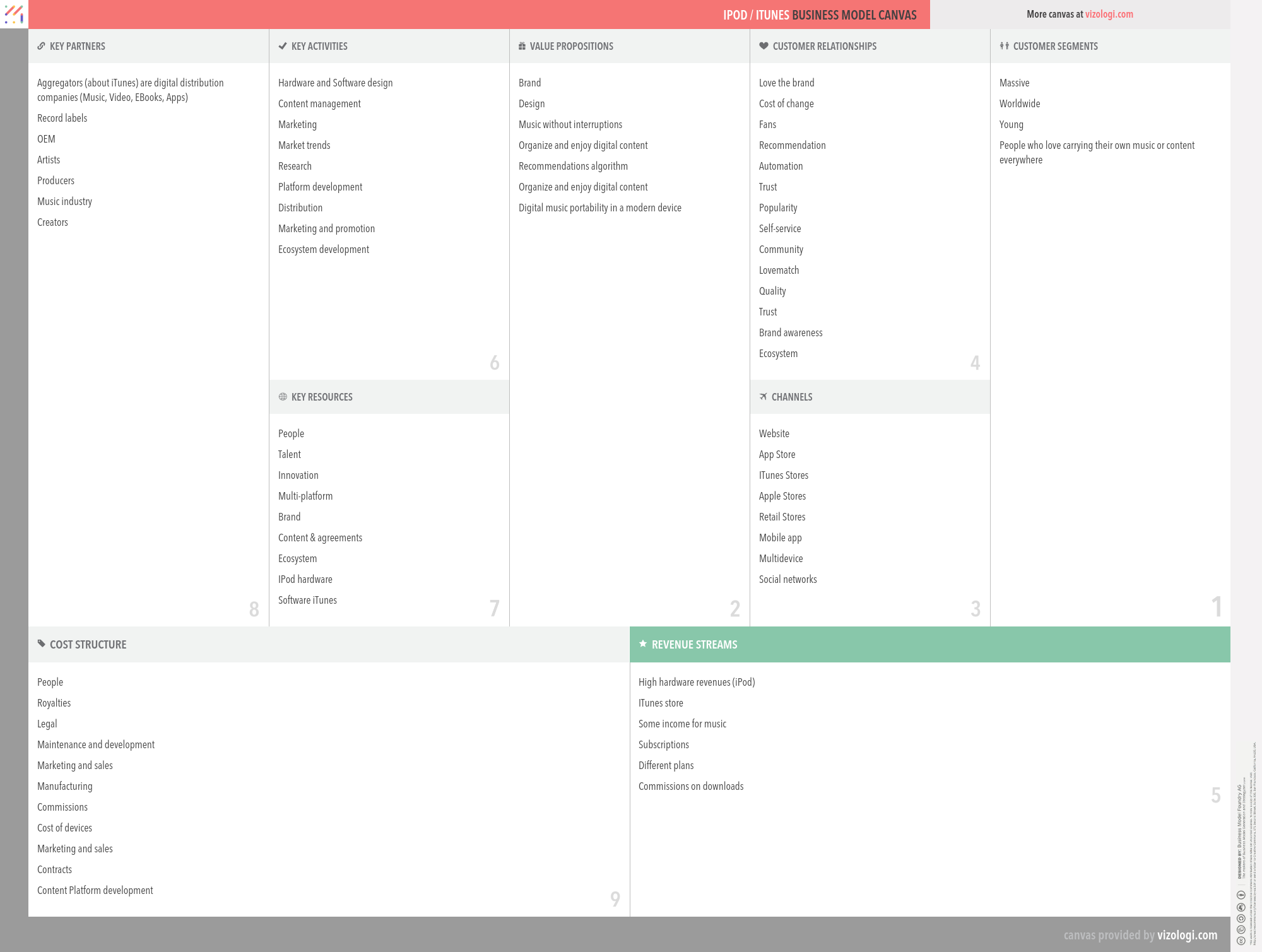 Released on April 3, 2010, iPads are tablet computers developed by Apple. Including a virtual keyboard and a multi-touch screen, the user interface is complete in iPhone. Some models have cellular connectivity while every model has Wi-Fi features. After Android-based tablets, iPads are the second most popular tablets in the market.

The latest released models of iPads are iPad 2017 and iPad Pro.

Released originally in April 2015, Apple Watch is a series of smart watches developed by Apple. Other than just viewing time, it can also be used to track fitness regimes and other services.  The latest model released is the Series 3, which was released on September 22, 2017.

The online music service offered by Apple pionered the on-demand service approach, where you can listen to music at anytime, anywhere, by using anydevice. 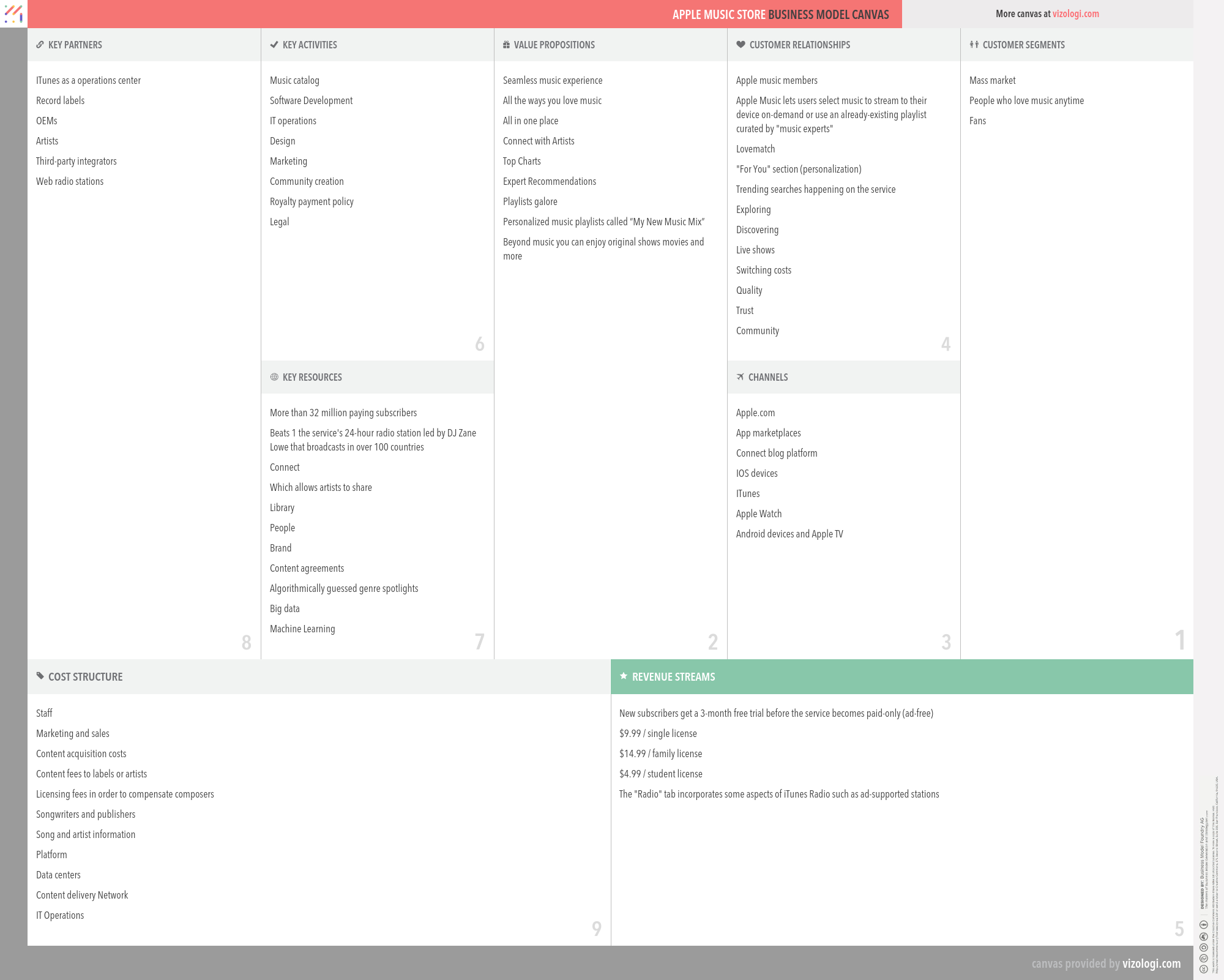 Released on January 9, 2017, Apple TV is a digital media player and micro console developed by Apple Inc. It can be used to stream content into compatible televisions.  Apple TV works on only HDMI devices. It can be synced with other Apple devices such as iPhones or iPads and can be controlled by Apple Remote.

This service opened a new way of possibilities to the Apple company, mobile payment more than a cool software feature can be considered as a basic necessity, we live in a world where you’re continuosly conected to your digital life, cash should dissapear as long as the digital wallets will be spreaded. 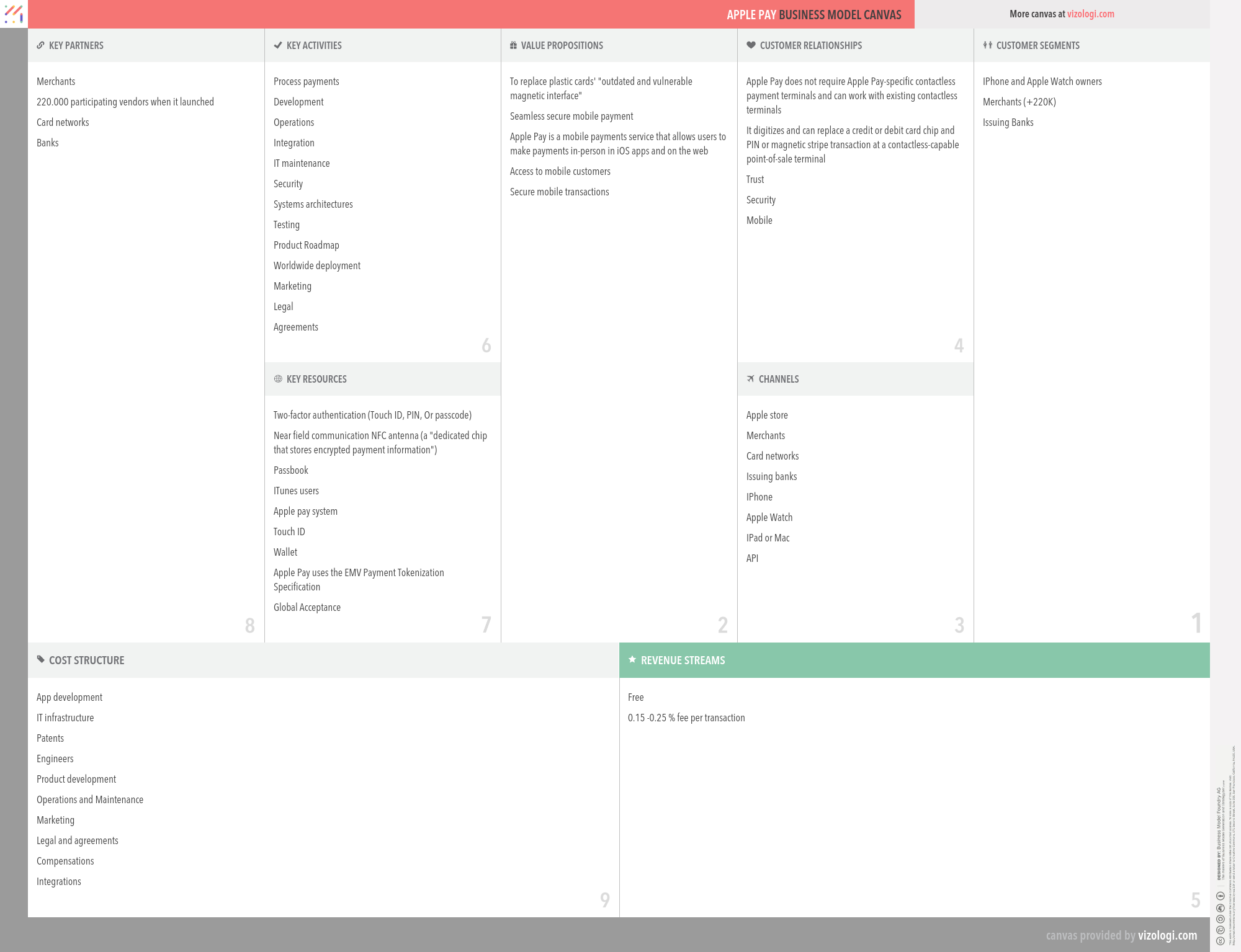 Acquired by Apple for $400 million in December 2017, Shazam is a music identifying app developed by Shazam Entertainment Ltd, a British-based app making company. It was founded in 1999 by Chris Barton, Philip Inghelbrecht, Avery Wang and Dhiraj Mukherjee. Comparitable in iOS, Android and Windows OS devices, it used the built-in microphone to amass a short sample of the music being played. Then it generates an acoustic fingerprint formed on the sample and compares it with the central database for a match in the records. Once the match is found, it sends information such as the artist, song title, and album back to the user. Shazam is said to have much better features than Siri’s inbuilt music identifying system.

Siri, developed by Siri Inc and sold to 2010, is an intelligent personal assistant which is a part of iOS, macOS as well as watchOS and tvOS. It was first developed as an individual app to help book reservations at restaurants and cafes.

Siri was first released as an app for iOS in February 2010 and then later released with the fourth generation of iPhone, iPhone 4S. It uses the in-built microphone to listen to the queries and a natural language user interface to answer questions and perform actions as directed by the users. With continuous usage, it adapts itself to the priorities and preferences of the users. It has also been integrated to other Apple products such as iPad, Mac, Apple TV etc.

Acquired by Apple on July 1, 2002 for $30 million, Emagic, popular for its music sequencer, Logic Pro, is based in Germany. Apple acquired Emagic to develop its digital audio workstation software GarageBand which is known for its looping melodies and wide levels of customization. After acquisition, Emagic is known as Logic Pro.

Beats Electronics, having headquarters in California, was acquired by Apple on 2014 for a whopping $3 billion which made it the largest acquisition made by Apple. Beats Electronics was founded by music producer and rapper Dr. Dre and former Interscope Geffen A&M Records chairman Jimmy Iovine. While the initial focus was on headphones and speakers, it soon expanded its horizon by launching the subscription-based streaming service, Beats Music.

The formation of NeXT Inc is just like a movie plot. Steve Jobs was once forced out of Apple, the company he helped launch in 1976. He then started NeXT along with few people from Apple. 1988 saw the release of the first NeXT computer.

Acquired by Apple on November 2013 for $345 million, PrimeSense is a 3D motion sensor company based in Tel Aviv. Xbox 360 game system contains the motion tracking software developed by the company. This 3D technology was found in itSeez 3D, an iPad app which allows users to capture 3D models.

Before getting into the detailed structure of the business model of Apple and analyzing the important segments, let us look into how Apple earns revenue.

How does Apple earn revenue?

The majority of the revenue is earned through the products developed and sold by Apple. Out of these, the major share is coming from the sales of iPhones. The revenue is also generated through the sale of paid apps in iOS store, Mac store etc. Another way of earning revenue is through Apple search ads. Developers can pay Apple to have their product displayed first in the search list of the stores. 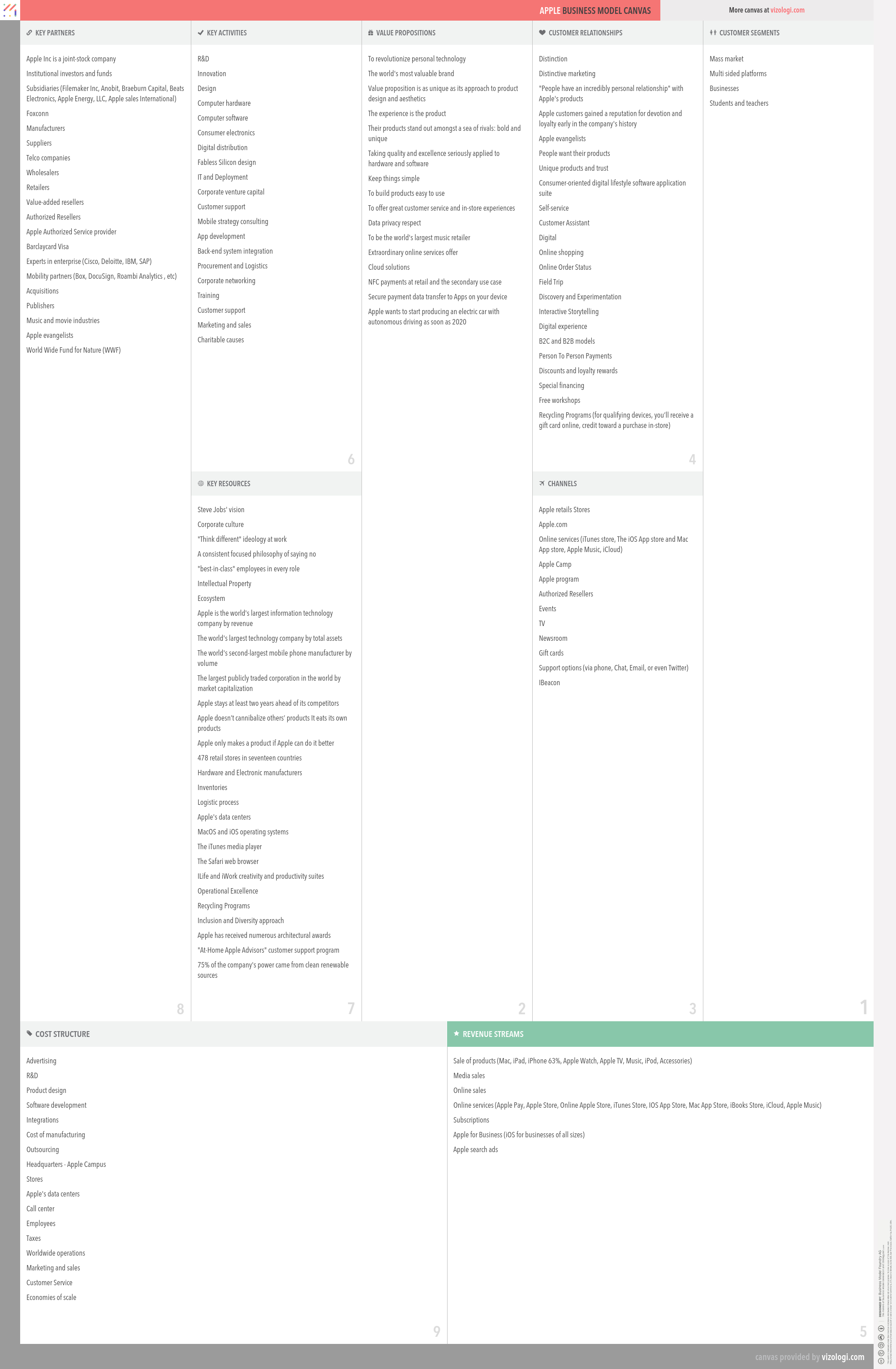 Customer Segments: This denotes the people for whom Apple is useful.

Value Propositions: What all problems can Apple solve and what all do they have to offer.

Channels: What all are the platforms used by Apple to reach the customers/users.

Customer Relationships: Features offered by Apple to connect with the customers.

Revenue Stream: What are the main income sources? Where do all the users have to pay?

Key Activities: What are the activities undertaken by Apple.

Key Resources: What all resources do Apple need to be successful?

Key Partners: Who all help Apple? What all do they do?

Cost Structures: What are the types and relative proportions of fixed and variable costs that Apple incurs?

With each product, Apple is showing how unique and innovative they are. It is no doubt that they would rule the smartphone market for a long time. While the future of iPhone is a debate due to the changes in the latest iPhone X, the other products show promise.